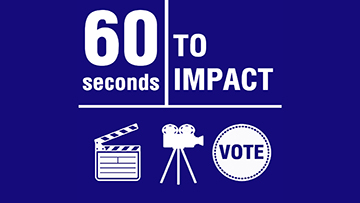 Palm Springs, CA (May 12, 2016) - 60 SECONDS TO IMPACT was born from the idea that everyone has a voice, and it's time for massive change in this election year.

This unique film competition - a collaboration between the Palm Springs International ShortFest and the University of California, Riverside - celebrates the fact that everyone has a voice in our democracy, and together we can impact history.

We're asking people from around the world to create a short, non-partisan film of 60 seconds or less, explaining why they vote. Films can be live action, documentary, animation, interviews - anything goes, as long as it's original work. Upload the film and inspire others to get registered to vote.

Cash prizes will be awarded to the finalists, who will be announced during the 2016 Palm Springs International ShortFest, held in Palm Springs June 21-27. But the real payoff is motivating young people and first-time voters to play a role in the November 2016 U.S. election.

Additional partners include Rock the Vote, the largest non-profit and non-partisan organization in the United States to engage the political power of young people; The Casting Society of America, partnering with us to reach out to its 600-plus worldwide membership to ask its members, actors and filmmakers to create videos and lend a voice to the campaign; and Pocial, a new social polling company based in Palm Springs, which is co-creating the technology to enable public voting and data analysis.